Lost and Found: A Writer’s Guide to Navigation 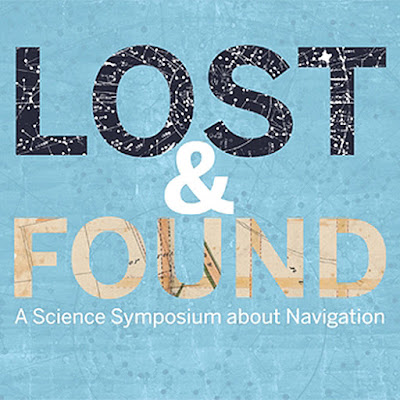 Every so often, an event comes along that is incredibly interesting and while it has nothing in particular to do with a novel I’m working on, I know the notes I’ll take will find their way into my writing—sometime. The Radcliffe Institute’s science symposium about navigation, Lost and Found, is a perfect example.

In a word—this symposium was intense. It started out with presentations on neuroscience. One of the more accessible portions was the work of Eleanor Maguire, who studied the growth of the hippocampus in taxi drivers from training onward through their careers. As a result of memorizing London’s 25,000 streets, the hippocampus grew, and MRIs revealed brain activity as the drivers planned and dealt with unexpected obstacles using a simulation program. Upon retirement, the hippocampus began to shrink, and returned to average size within two to three years. Maguire’s research further demonstrated that people who say they have a poor sense of direction typically fall into a category of people who are able to recognize landmarks, but are unable to place them on a map. In contrast, people who find their way around well were able to draw detailed maps after playing a video game called Fog World. Maguire won an IgNobel award for her research in 2003. Though the IgNobels make light of a lot of research, there was also a good deal of appreciation for what she had discovered about brain function and the ability to navigate.

What followed were presentations on animal navigation and anthropological studies of migrations of people living in the South Pacific; then we were on to two of the most interesting lectures: lost person behavior, and navigation in outer space.

It was these afternoon sessions I found a lot of inspiration as a writer. Professor Richard Feinberg talked about the different types of tools used by cultures: the Carolinian star compass, the wind compass, star paths, and so on. Whether you’re portraying a real human culture and need your seafaring characters to know the trade winds as they cross the ocean, or characters in a fantasy world are trying to determine how to find their way to a land they’ve only heard about in legend, there were a lot of great details that could help shape how your characters journey in known and unknown lands.

The most dynamic presentation of the day was about lost person behavior. There are tons of novels and movies about people being lost, or trying to find someone. Did you know there is a database of more than 100,000 people that characterizes their behavior based on the data collected by search and rescue teams?

After obtaining information about all the wheres: Is it known where the person went? Have they been lost before. If so, where were they found? Where have other people been found if they have been lost in the same area? Is the person a hiker, angler, mushroom forager, or straying child? Once an initial planning point (IPP) has been determined, such as where the person’s abandoned bicycle was found, search efforts begin in earnest. The person’s cognitive abilities provide a wealth of detail that help search and rescue teams: Alzheimer’s patients tend to stick within 15 meters of roads or paths, and usually stop wandering in a short time. Autistic children are often drawn to light, water, and reflective surfaces. There are distinct patterns that emerge ass data continues to be collected. There are specific phases f being lost: (1) The error at the Decision Point, (2) terrain analysis, (3) confirmation bias, or “bending the map,” where people ignore the obvious signs they’re on the wrong track and are convinced they know where they’re going, (4) phase of anxiety, (5) realization of being lost, and (6) the self-rescue strategy, of which there are many.

Self-rescue strategies involve everything from deciding to stay in a straight line to finding contour paths that reach a wider area, or, staying put and hoping to be found. And over the years, statistics have changed due to technology. In the past, most hikers headed down, with only a few staying at the same elevation, and a good percentage heading up to get a view of the vista in order to find the best path out. Now many hikers head up to a higher elevation to find cell phone service.

These known patterns help establish several strategies for finding people, and the maps of probability are based on these behaviors. Robert J. Koester, the presenter of this amazing information, has written several books on the subject. If being lost is at the heart of your plot, you may want to seek these books out to make the lost person’s behavior, and that of the rescue team’s, more realistic. 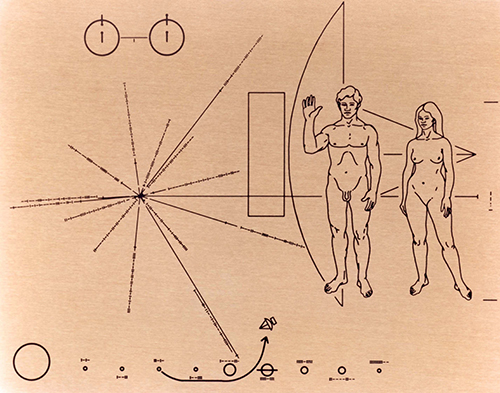 The final session of the day was perfect fodder for sci-fi fans. With the study of pulsars, we have learned that they can serve as a sort of GPS. In fact, the Pioneer 10 and 11 space probes carry plaques suggested by Carl Sagan, to serve as a beacon to show any spacefaring alien life the way to Earth. (Of course, if you’re a fan of Douglas Adams, you know this could be a very bad idea, if the Volgons show up to read their poetry before blasting your planet into pieces to build a galactic superhighway.)

The solar system at the bottom of the plaque is obvious. But the star-like graph to the left? It maps 14 pulsars that were known at the time of the plaque’s creation, and they position Earth at the center. Presenter George Hobbs talked about how time and position could theoretically be used as a GPS system in space, if a ship could map at least 4 pulsars. It was fascinating to think of how this could be used in fiction. My fourth novel does have space travel in it, but only as far out as Mars and the asteroid belt. But thinking about using pulsars as a means of navigation made me want to send my characters out even further into the galaxy.

I’ve always been a strong supporter of continuing education, and believe it’s a key component for writers, regardless of genre or writing style. There is a traditional image of writers being sequestered away in their garrets, writing manically and producing book after book. But for practicality’s sake, many of us need careers to support our craft. Publishing houses offer little in the way of advances for a vast majority of authors, and even in the indie world, being discovered by readers on a scale of being able to live off the royalties is a challenge. Indeed, there are those who say authors need to be connected to the world—the awesome blog run by the Alliance of Independent Authors made this point recently.


There are endless, free resources out there for authors to use. And symposia such as these are of immense benefit to all kinds of writers.
Posted by Christine Frost at 1:21 PM